The First Congregational United Church of Christ of Lake Mills was organized on August 15, 1847, only 10 years after the first settlers arrived in the area.  The initiators of this congregation felt it was important for there to be a place of spiritual renewal and support, and a Christian presence in the midst of a difficult and hard life.  At that organizing meeting there were four men and five women who became charter members, and they adopted Articles of Faith and a Covenant.

The first pastor of this congregation was Rev. Edwin Dickenson Seward, and the first church building was dedicated in October, 1852.

From the beginning, First Congregational Church sought to be a faithful presence in the area.  In 1850, the church became an abolitionist  church by adopting an anti-slavery resolution.  A “Sabbath School” for the purpose of passing on the faith to children was part of the life of this congregation even before it was organized.  In 1860 First Congregational Church gave women the right to vote on church matters – 60 years before the nation gave women the right to vote.

On June 1, 1902, the present church building was dedicated, and on September 20, 1959, the Christian Education addition and the enlarged fellowship rooms were dedicated.

First Congregational UCC is known locally for The Peanut Project, a popular community event since 1954, where church members and friends prepare fresh peanuts for sale.  The church has been a participant in local community mission and ministry and for the last five years, and has sent teams on mission trips to a number of places in the US and in Ecuador. 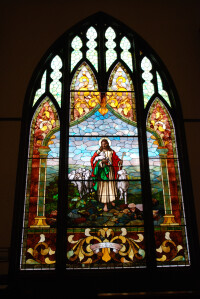